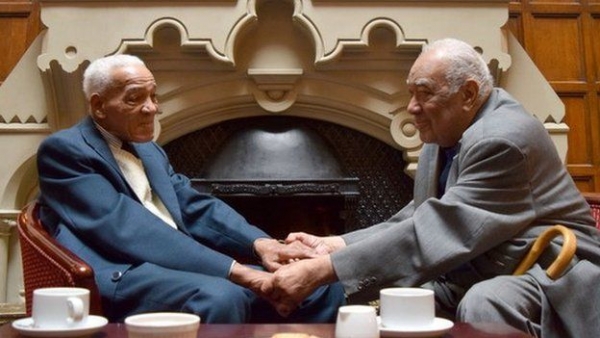 Soldiers of the Caribbean: Britain's forgotten war heroes.........Fighting for King and Empire: Britain's Caribbean Heroes, which airs at 21:00 BST on 13 May BBC Four

If you ever wonder why the history books fail to acknowledge the African Caribbean involvement in World War 2 , watch this program tonight . Please share among you friend  colleagues etc etc.

They fought against Hitler and helped rebuild Britain - yet the contributions of thousands of men and women from Caribbean colonies during World War Two have been largely forgotten.

Some 10,000 left their families and homes to join the British armed forces, working behind the scenes and on the frontline to defeat the Nazis.

"We were British subjects and that was something to be proud of," said Victor Brown, a Jamaican who fought with the Merchant Navy.

Although Britain was initially reluctant to let black people join the war effort, the rules were relaxed as the war progressed and casualties mounted.

Enthusiasm to defend "King and Empire" was widespread across the Caribbean and Mr Brown, like thousands of others, was quick to sign up.

In 1942, he was one of only two black men serving on an oil tanker in the North Atlantic when it was torpedoed by the Nazis. He is credited with saving several lives on board and still remembers the incident vividly.

"We rushed out to the deck and we could see the periscope out of the water," he said.

As the ship listed, he used an axe to cut down a lifeboat, and cleared the vessel.

"If we had have left it, the ship would have eventually dragged the lifeboat down with it," he said.

Winston Murphy, the only other black member of the 42-strong crew, was among the survivors. Seventy years on he said he has never forgotten his friend's quick thinking.

"Had he not chopped that rope we would never have got clear of that boat," he added.

The friends, now aged 94, swapped stories during a recent reunion.

"It's almost like a miracle," said Mr Brown. "I never thought we'd live long enough to meet again after all the years we've been separated."

The pair were lucky to survive. The death toll for black merchant seamen during World War Two was high. Thousands perished, while others died serving with the Royal Air Force and the Army.

Allan Wilmot, from Jamaica, volunteered to join the Royal Navy in 1941 when he was just 15.

"Being young you didn't realise the danger until you were actually there. You hear the guns fire and realise this ain't no joke," he said.

Away from the frontline, life also presented challenges. Many servicemen struggled to adapt to Britain's cold climate and had to fend off racial prejudice.

"Being British you feel like you are coming home but when we came here it was like we dropped out of the sky. Nobody knew anything about us," said Mr Wilmot.

Those who survived the war were given the chance to return to their home countries, but many opted to remain in Britain and created an enduring multicultural legacy.

Jake Jacobs served as an equipment assistant with the RAF at Burtonwood. He briefly returned to Trinidad after his period of service came to an end, but returned to Britain in search of work.

He fell in love and married a local woman, prompting a backlash from members of the public who disagreed with mixed-race relationships.

"They just went dumb. They just stared," explained his wife Mary from their home in Solihull.

The pair struggled to find accommodation after their wedding and Mrs Jacobs lost touch with members of her family.

"I spent days and days crying," she added.

Nevertheless the couple persevered. Ex-servicemen were offered jobs by the state and Mr Jacobs began working in telecommunications.

He received an MBE for his efforts, but thinks black soldiers need further recognition

Like thousands of his former colleagues he stayed to help rebuild post-war Britain, changing its cultural landscape forever.

Despite their countless sacrifices, some veterans feel their war time experiences have been forgotten and have spent their lifetimes fighting for equality.

Sam King MBE was born in Jamaica in 1926 and served as a ground crew engineer with the RAF.

"I don't think we are being recognised for our contribution," he said. "Many young people don't realise that so many volunteered during the war and fought and died."

Out of media player. Press enter to return or tab to continue.

Media captionJake Jacobs: "I remember getting on a bus... and someone touched my neck to find out if I was really black"

Who fought for Britain during World War II?

The West Indian Association of Service Personnel was established to offer support to ex-servicemen and commemorate those who lost their lives in battle.

"If we didn't form that association the public wouldn't know the participation of black West Indians who served the British Empire in their hour of need," said Mr Wilmot.

In November 2014 a memorial dedicated to African and Caribbean soldiers was unveiled in Brixton, south London, where many ex-servicemen settled after the war.

However, the monument has now been placed in storage, until a permanent home for it can be found.

Next year Mr King, who now lives in Camberwell, south-east London, will celebrate his 90th birthday.

But his determination to remember his comrades shows no sign of fading.

The veterans' stories feature in the BBC Four documentary, Fighting for King and Empire: Britain's Caribbean Heroes, which airs at 21:00 BST on 13 May. It is based on the film, Divided by Race, United in War and Peace, by the-latest.com.