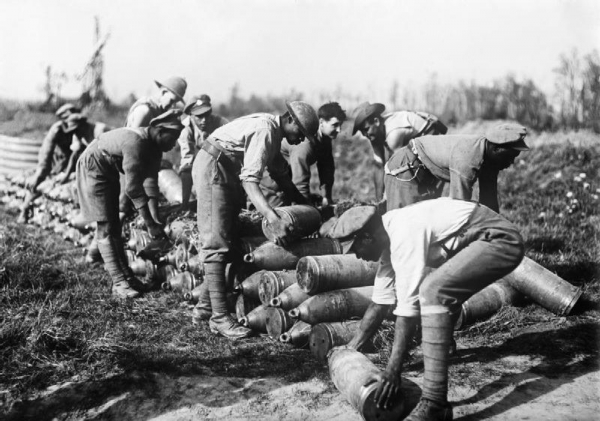 Garry Stewart is battling to gain recognition for the brave black band who traded Caribbean sunshine for sodden Flanders fields.

They were the forgotten army in World War One: the Allied soldiers whose time in the trenches has been airbrushed from history.

You have to search hard to find their faces in the grainy, scarred footage from The Front. But they were there – fighting bravely through mud and machine gun fire, facing the very same horrors that befell Tommy.

But, as the slaughter spread with each bloody day, Britain was forced to bite the bullet. Blood had blurred the colour line.

“It is not about memorials, it is about recognition,” stressed 42-year-old Garry. “It is about teaching children the part played by Afro-Caribbeans in the war.”

Nearly 20,000 served our King and Country, going over the top at the Somme, Passchendaele and, on the Middle Eastern front, Palestine and Egypt. Two thousand died, some felled by flu spawned by the cold, wet conditions.

Shamefully, we killed our own. Some of the Caribbean soldiers being taken by ship to the Western Front froze to death – simply because the army refused their pleas for warm clothing.

Garry, who ended his seven year army career in 1996, was there on Thursday when ex-servicemen gathered at Kingsdown Avenue Recreation Area, Great Barr, for “Gallantry and Loyalty” – an event marking the role Commonwealth countries played in the Great War. The exhibition was organised by Perry Barr Housing Liaison Board and a project called Why Are West Indians In This Country?, fronted by local resident Horace ‘H’ Barnes.

As part of the fight for recognition, Garry has joined the clamour to bestow a posthumous Military Cross on Second Lieutenant Walter Tull, the British Army’s first black officer. Brought up in a Bethnal Green orphanage, he was a man who broke racial barriers. Before the conflict erupted, he played football for Spurs – only the second Afro-Caribbean to turn out for a top-flight club.

He served in the Footballers’ Battalion of the Middlesex Regiment, fought at the Somme and was mentioned in despatches for the courage and coolness display while leading a 26-strong raiding party. Tull was recommended for the highest honour after his death on the Western Front in 1918, aged 29. His body was never recovered.

Not surprisingly, in an age when it was forbidden for “non European” officers to lead white soldiers into battle, the pleas were snubbed.

“He was loved by his men,” said Garry. Tull is one of many black men whose heroics have been forgotten. “All I want is full recognition,” added Garry. “All I want is the understanding that it was a world war and the world took part.”