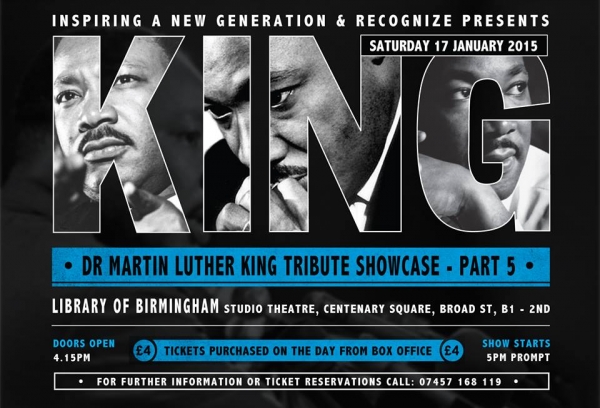 The Library of Birmingham Studio Theatre

For the fifth year in succession, Inspiring a New Generation & Recognize brings together artists, musicians, poets, activists and community representatives from across Birmingham’s diverse communities to pay tribute to Dr Martin Luther King Jr.   The Tribute will celebrate Dr King's life and remember his journey for social justice, equality and reconciliation.

Audrey Hayles-Parkes (founder) explained “Our aim is to foster a shared conviction through artistic performance to uphold the admirable ideas realized by Dr. King, that regardless of race, religion and cultural diversity, humanity united can change the face of the world for the betterment of our future generations”.

Garry Stewart from Recognize  said " it's a chance for  us to  remember the life and legacy of the great civil rights leader, the Minister, the Professor and the man who  inspired and continues to inspire generations to remind us of our right to equality and justice.

Community Activist Desmond Jaddoo states “this is an opportunity not only to remember, but, to educate current and future generations of the struggles that many went through in order to achieve the desperately needed change, that many take for granted today. Furthermore how people of the same mindset can work together in unity to level the playing field as equality, is a right and we are all the same underneath, irrespective of who you are.”

Please join us at this special event, as we pay Tribute to the life and legacy of a true icon whose powerful spirit touched the lives of so many people throughout the world and inspired future heroes to champion the cause for freedom, equality and social justice.

Special thanks to all the performers who never hesitate to offer their time and artistry to make this yearly event possible.