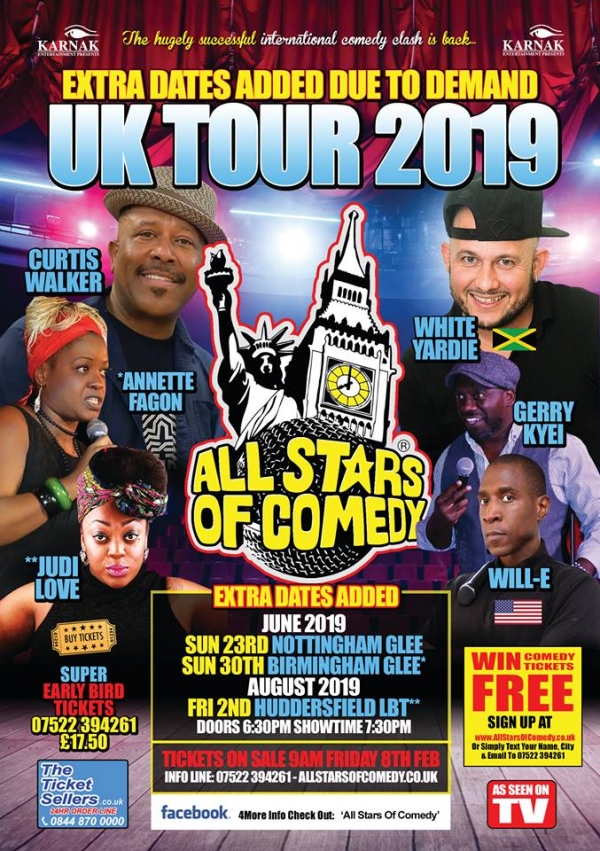 ALL STARS OF COMEDY

All-Stars Of Comedy Fresh from their recent GLEE Sell-out. The hugely successful international comedy clash is back with an almighty bang...

This season's star-studded All-Star line-up is jointly headlined by "CURTIS WALKER" the undisputed Don on the UK Comedy Circuit.

Alongside, "WHITE YARDIE" aka Prince Harry, the Jamaican Internet and social media sensation who's hilarious comedy sketch videos have gone viral, who has certainly caught the attention of comedy fans across the globe.

Alongside American sensation WILL-E Star of Russell Simmons "Def Comedy Jam" & P Diddy's No1 Bad Boy Of Comedy. Once seen you will never EVER forget!

With support from ANNETTE FAGON a loud and engaging comic. Annette's stage presence takes hold of an audience and makes it sit up. With a character which has been crafted to perfection and a personality that will not be forgotten in a hurry, Annette is a local act destined for stardom.

"With this sort of retro observational comedy, she's just like Peter Kay would be - well, if he were female, black and from Leicester" CHORTLE

Fresh, Vibrant & Simply Unmissable - If there's one comedy show that you have to see, It's Gotta be this!' Guardian Laugh after Laugh… Full to the brim with raucous and cheeky performances' Nottingham Post

This is the "MUST-SEE" Comedy Show of the year and will Sell-Out!

Tags:
All Stars Of Comedy 2019 UK TOUR BIRMINGHAM
comedy
Back to top